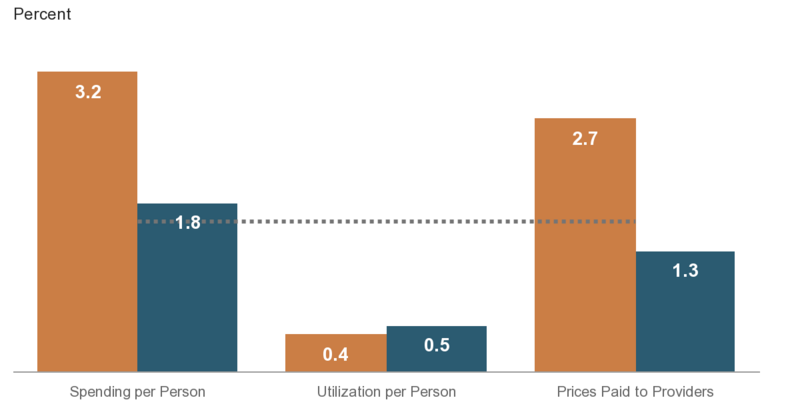 CBO’s analysis and a review of the research literature found that commercial insurers pay much higher prices for hospitals’ and physicians’ services than Medicare FFS does. In addition, the prices that commercial insurers pay hospitals are much higher than hospitals’ costs. Paying higher prices to providers can have several effects. First, it can increase insurers’ spending on claims, which may lead to higher premiums, greater cost-sharing requirements for patients, reductions in the scope of benefits, or other adjustments to plans. Second, it can increase the federal government’s subsidies for health care (that is, the government’s spending on health care plus forgone revenues from federal tax preferences for health benefits). And third, it can slow the growth of wages.

Compared with the prices paid by Medicare FFS, the prices paid by commercial insurers also vary much more among and within geographic areas. Large variation in prices for similar services can be evidence that markets are not operating efficiently.

CBO examined potential explanations for why the prices paid by commercial insurers are higher and more variable than those paid by Medicare FFS. CBO’s analysis and literature review suggest the following conclusions: